The bile ducts that emerge from the liver, their small size make them vulnerable to various pathological processes that interrupt their structure and function.

What is a Biliary Stricture

The bile ducts that emerge from the liver, their small size make them vulnerable to various pathological processes that interrupt their structure and function. Such abnormalities in turn lead to a series of other problems. The passage of bile, a fluid mixture that aids in intestinal fat absorption, starts adjacent to the liver cells themselves. Each liver cell, or hepatocyte, produces bile and drains it into little canaliculi alongside the liver cells. These canaliculi coalesce and ultimately form larger ducts. When viewing the liver with the naked eye, one can see ducts emerging from the left and right sides of the liver. These ducts merge until it forms one single duct, the common bile duct. The common bile duct also receives bile from the gallbladder through its cystic duct. The common bile duct ends at a sphincter in the small intestine and, at this point, receives enzymes from the pancreas through its pancreatic duct.
Given this complex structure, the passage of bile can be blocked from within the liver (intrahepatic) or outside the liver (extrahepatic) and involve causes inside the duct (intraductal) or outside the duct (extraductal). Intrahepatic causes of biliary
obstruction include hepatitis and cirrhosis, both of which have numerous biological and chemical causes of their own. Extrahepatic causes of biliary obstruction include gallstones, tumors, parasites, inflammation of the bile ducts, and fibrotic strictures secondary to traumatic injury.

Whatever the cause, biliary obstruction results in two things: backflow of bile prior to the obstruction and absence of bile after the obstruction. Before the point of obstruction, bile accumulates so that excessive amounts reach the bloodstream. This results in yellowing of the eyes and skin (jaundice), discolored urine, and itchy skin. Meanwhile, if bile does not reach the intestine, ingested fats will be unabsorbed and be excreted via defecation. As a result, the fatsoluble vitamins A, D, E, and K will not be absorbed either, increasing the risk of deficiency of such vitamins. Furthermore, without the pigment content of bile that gives feces its characteristic color, stools will appear pale. 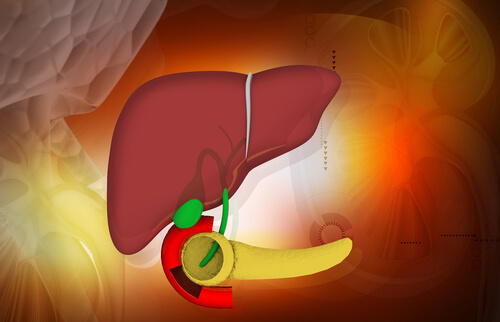 The term “stent” is defined as a thread, rod, or catheter, lying within the lumen of tubular structures, used to provide support during or after an anastomosis, or to assure patency of an intact but contracted lumen. Biliary stents are typically made of a metal alloy or polymeric or biodegradable material in a variety of designs that are rigid enough to maintain Bile Duct patency.
Biliary stents are designed to relieve obstructive jaundice caused by malignant bile duct obstruction
Bile is a substance that helps to digest fats and is produced by the liver, secreted through the bile ducts, and stored in the gallbladder. It is released into the small intestine after a fat-containing meal has been eaten. The release of bile is controlled by a muscle called the sphincter of Oddi found at the junction of the bile ducts and the small intestine.